Before talking about speaker wiring configuration, a bit of theory about amplifiers and speakers.

The above statement is true for an “ideal” amplifier, which in theory is a perfect amplifier. In reality the measurements never show a double or a halve of the power output. But the concept is: reducing the impedance increases the power, while increasing the impedance reduces the power.

On the other side, speakers also come with an impedance and power handling rate (among many other characteristics not in the scope of this tutorial). The impedance of a speaker corresponds to its minimum “resistance” at a certain frequency, means that is the minimum the speaker can reach (thus the maximum current drain that will affect the amplifier), in fact the speaker impedance is different throughout the frequency spectrum, the nominal impedance is an average of the lowest impedance the speaker can reach. The speaker power handling is the maximum power a loudspeaker can handle. This number should always be equal or greater to what the amplifier is capable to deliver.

To get the best out of your amplifier is always recommended to match the impedance of the amp output and of the speaker connected.

In this case the match is perfect. The speaker will be able to handle the max power delivered by the amplifier.

In this case the speaker has a greater impedance, in such case the amount of power delivered by the amplifier will be lower. In a perfect amplifier, which doesn’t exist in the real world, the power will halve.

Now that we understand about impedance and output power let’s see what happens when we wire speakers in series. Juts like when we were studying about the ohm’s law back in school, wiring resistors in series will generate a total resistance that corresponds to the sum of each resistor value. Easy.

In the audio world, there is no difference, wiring speakers in series will result in a total impedance “seen” by the amplifier that corresponds to the sum of the impedance value of each speaker.

When wiring speakers with the same impedance in series the power distributed is equal to the power delivered by the amplifier (which will change according to the total impedance of the series circuit) divided by the number of speakers. An example in the diagram below: 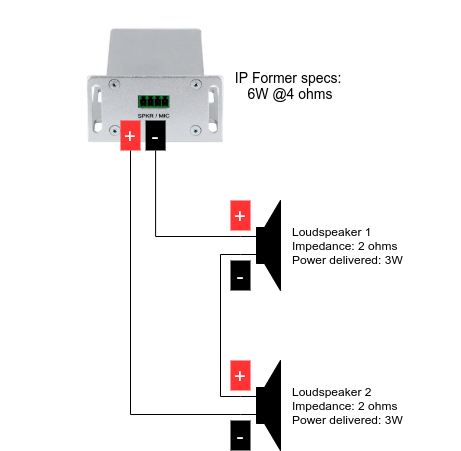 In this scenario the total impedance is 4 Ω, which matches the IP Former optimal impedance for it to be able to deliver 6W of power. The power will be distributed evenly to both speakers, 3W each, thus the loudspeaker should be able to handle 3W of power or more.

If the impedance of each speaker is different the power will be distributed differently following, where the loudspeaker with the lower impedance will always get more power compared to the other in the circuit.

So when wiring 4 speakers in parallel, having the same impedance, will result in a total impedance which is equal to the single impedance of each speaker divided by the number of speakers.

When wiring speakers with the same impedance in parallel the power distributed is equal to the power delivered by the amplifier (which will change according to the total impedance of the series circuit) divided by the number of speakers. An example in the diagram below: 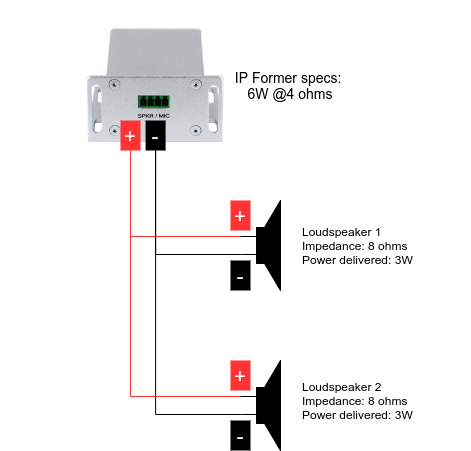 In the above scenario the total impedance is 4 Ω since the 2 speakers are 8 Ω each. The power distributed is the same across both speakers because they have the same impedance.

In this case the power distributed will change according to the impedance of each individual speaker.

At this link there is a useful calculator that can be used to verify how an ideal amplifier distributes the power across speakers wired in parallel plus some other useful resources that helps you in learning more about audio distributions in general.